The City has begun the development of specific area plans for many of the corridors and areas zoned for mixed-use development as part of the Land Development Code adopted by the City Council in May of 2020.  The areas are important for future redevelopment and the economic stability of the City.

A sub-area plan is a type of long range planning for a limited geographic area within the City. These sub-area plans focus on goals and policies for topics such as land use, urban design, architectural design and transportation.

The New Town Sub-Area is generally defined as the areas along Wadsworth Boulevard and Bypass between the G Line tracks on the north and Interstate 70 on the south.  The Arvada Marketplace shopping center along 52nd Avenue is also included.

What's happening now: The next open house will take place during the first quarter of 2022.

The Northwest Arvada Sub-Area is generally defined as the area east of State Highway 93 to Gladiola Street, including the Indiana Street corridor, and between the railroad tracks on the south and the City boundary on the north.

What's happening now: The next open house will take place during the first quarter of 2022.

What's happening now: The Planning Commission will hold a public hearing regarding the plan in the next few months. Additional information will be posted here in the near future.

How To Get Involved

After use of the Land Development Code (LDC) for over a year, the City team has identified a number of minor changes, and a few major changes, that will make the Code easier to understand and administer.

Fine-tuning was anticipated, as new concepts and processes were introduced with the LDC.

The City Council will hold an additional workshop regarding the updates to the LDC on Monday, December 13th.

Details regarding the proposed changes can be found in the following documents:

The City of Arvada has updated the Land Development Code (LDC), which are the regulations that govern development in the city. The LDC affects all development and helps shape where you live, where you work and where you play. The previous LDC was approved in 2008 and while there had been some updates, it had become out of date. A review of current issues was needed to make sure the LDC provided the best zoning and land use approaches for the future.

Archived information regarding the Land Development Code update process can be found on this page, including presentations for committees and open houses. 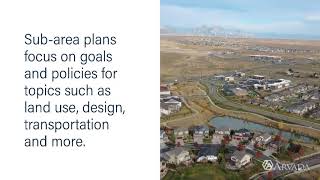