The City of Arvada Public Works Department is conducting a multimodal study of Ward Road. The study will evaluate the corridor and recommend improvements to the bicycle and pedestrian infrastructure. The limits of the study are from Ridge Rd to the south to W 72nd Avenue to the north.

Arvada Public Works is coordinating with the City of Wheat Ridge to extend the study area to the Ward Road G line Station as that is a major destination along the corridor and with CDOT as a large segment of the roadway is owned and maintained by CDOT.

The study aims to produce recommendations for improving the corridor in both the short term and long term.

The City is working with it's consultant Toole Design Group, a group of residents on a Stakeholder Committee, and you, the public, to first look at the existing conditions, identify any issues, and gather input on a vision for the corridor.

The City team is inviting residents to provide input in January via SpeakUp.  The team will also hold a virtual public meeting on January 26 via Zoom. This feedback will help the team work with our Stakeholder Committee to develop a set of options for short term and long term improvements as well as prioritizing those improvements. These options will then be presented to the public to provide feedback. The City is also planning to implement a quick build demonstration along the corridor, which will be determined by the final recommendations. 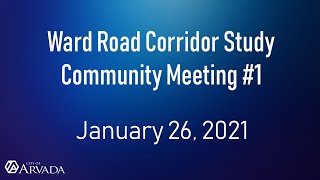